The “ebi” shrimp design in the making.

Paul with Chiyoichi san in his gallery in Tanbatachikui, November 2012

In September 2011 at The Meadows Pottery we were privileged to receive an unannounced visit from the eminent Japanese potter, Chiyoichi Shimizu. He is an eighth generation potter from Tanbatachikui, the last pottery village in Tamba, one of the six Ancient Kilns of Japan which was studied by Daniel Rhodes in his 1970 publication, “Tamba Pottery”.

By chance a couple of students were soon to arrive for a lesson and Chiyoichi san was more than happy to go along with my request that he demonstrate on the wheel for us. A rare chance to witness first hand a true master of Japanese pottery.

So, once my students turned up, thrilled at the unexpected prospect, an impromptu masterclass ensued . Luckily we have a Japanese “Shimpo” potter’s wheel, which spins in both the western anti-clockwise direction and the clockwise Japanese way. Firstly Chiyoichi san centred a lump of clay about 10–15lb for throwing off the hump in the traditional Japanese way, although in this seated position he was not getting any support from elbows on knees as he would at home in Japan, with the wheel at floor level and sitting cross-legged. This did not appear to affect him one iota, over four decades of experience clearly evident in his touch. (He fired his first Noborikama [climbing] kiln in 1969).  He first threw a small traditional Tanbatachikui tokkuri (sake bottle), managing the single toggle Japanese cotton thread cut-off technique successfully enough with our stiffer fishing line. Next he threw a beautifully balanced “Sakura” Cherry blossom inspired bowl with a delicately altered rim, of his own design. Wonderful stuff!

One of the most striking things was not just the clockwise rotation of the wheel, but the completely different overall throwing technique he employed. For example, the relatively narrow base and the very open, shallow dish that the narrow-necked sake bottle started off as.

As with so many Japanese “craft” techniques (for want of a better word), the underlying logic and thoroughness of technical reasoning behind these very different throwing techniques seemed strongly evident, if not completely clear on a first view. I think this gives some inkling into the traditional Japanese apprentice’s task:  watch, gradually, gradually learn to see, truly observe, and predominantly from that (along with practice, practice, practice) learn what is to be learned (“show me”, in Japanese, means the same as “teach me”). I think this conscientious
thoroughness, long associated with Zen, actually predates it in Japanese history and to some extent explains why the Zen aesthetic and philosophy, of calm acute observation of things, as they are, became so comfortably and widely adopted in Japan, despite the relatively low number of adherents to the actual Zen Buddhist sects in the country. This approach to learning also implies having plenty of time to absorb the lessons required.

Chiyoichi san found most of the tools he needed on hand, but I did have to gaffer tape an extension onto the “egote” tool for him to use for bellying out the gentle low shoulder of the final piece he threw; using the remaining clay he formed a curious 15” high traditional sake bottle with a small vase form shaped into the neck. Usually made in two pieces, he threw this in one piece, leaving it for me to lift off the wheel later when it had dried off somewhat. While all the requisite camera snapping was going on Chiyoichi san’s final offering was a demonstration of traditional Japanese calligraphy, a Tanbatachikui shrimp design to be left with us as a memento.

This was a wonderful visit, thank you Chiyoichi san.

In November 2012, we were able to take up Chiyoichi san’s invitation to visit him at his workshop and gallery complex in Tanbatachikui. We had a very rewarding time, swapping some of our work for his and seeing the many other wonderful pottery sights in the village. 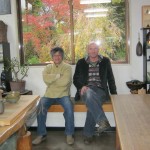 Paul with Chiyoichi san in his gallery in Tanbatachikui, November 2012

We saw many great pots and work in progress: 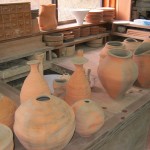 © 2019 The Meadows Pottery. All rights reserved.